The Zoo of the New 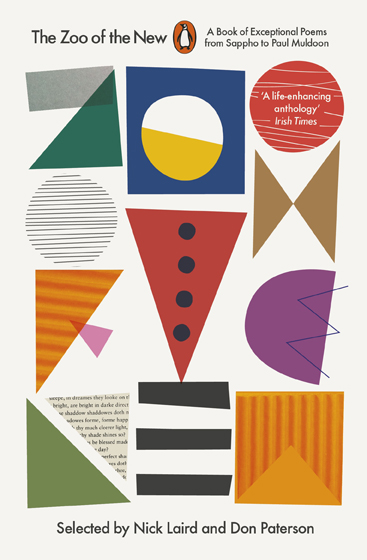 In The Zoo of the New, poets Nick Laird and Don Paterson have cast a fresh eye over more than five centuries of verse, from the English language and beyond. Above all, they have sought poetry that retains, in one way or another, a powerful timelessness: words with the thrilling capacity to make the time and place in which they were written, however distant and however foreign they may be, feel utterly here and now in the twenty-first century.

This book stretches as far back as Sappho and as far forward as the recent award-winning Denise Riley, taking in poets as varied as Thomas Wyatt, Sylvia Plath, William Shakespeare, T.S. Eliot, Frank O’Hara and Gwendolyn Brooks along the way. Here, the mournful rubs shoulders with the celebratory; the skulduggerous and the foolish with the highfalutin; and tales of love, loss and war with a menagerie of animals and objects, from bee boxes to rubber boots, a suit of armor and a microscope.

Teeming with old favourites and surprising discoveries, this lovingly selected compendium is sure to win lifelong readers.

Nick Laird, born in County Tyrone in 1975, is a poet, novelist, screenwriter, and lawyer. His poetry collections, published by Faber and Faber, are To A Fault (2005), On Purpose (2007) and Go Giants (2013). A new collection, Glitch, is forthcoming. His novels are Utterly Monkey (2005), Glover’s Mistake (2009) and Modern Gods (2017). Awards for his writing include the Betty Trask Prize, the Geoffrey Faber Memorial Prize, a Somerset Maugham award, the Aldeburgh Poetry Prize, the Rooney Prize for Irish Literature and a Guggenheim Fellowship.

Don Paterson was born in Dundee in 1963. He is Professor of Poetry and University of St. Andrews, Poetry Editor at Picador Macmillan, and has for many years also worked as a jazz musician. His poetry collections with Faber and Faber include Nil Nil (1993), God’s Gift to Women (1997), Landing Light (2003), Rain (2009) and 40 Sonnets (2016). He has also published translations of Antonio Machado and Rainer Maria Rilke, as well as books of aphorism and criticism. His poetry has won many awards, including the Whitbread Poetry Prize, the Costa Poetry Prize, the Geoffrey Faber Memorial Prize and all three Forward Prizes; he is currently the only poet to have won the T.S. Eliot Prize twice. He was awarded the Queen’s Gold Medal for Poetry in 2009.